It could have been a simple XML format but no ! The guys at Video Copilot knew I would be coming for them, so they devised the most annoying file format on Earth !

I suppose it's one of these companies that imagine they can create some products that are "Future Proof". Moohahaha ! Sorry guys, but nothing's future proof : ask the guys in nuclear waste storage...

Moreover, their products are called Video Copilot.Net so you may think they would take advantage of the smart serialization helpers that can be used with the .Net framework, like XML with XSLT for example. But that would be too easy.

The guys at VC decided to create their own future-proof-tarot-reading binary format with unique IDs and shit.

But enough whining, I owned the bastard format after all.

The OFP file starts with a header of 4 bytes :

The first 3 bytes are the classic signature bytes and the 4th byte x always equals 3 in my files. I assumed it's the file format version and threw an exception if it's not equal to 3.

The remaining data in the file are what I called Atoms.

Understand that these guys didn't simply store an INT, a BOOL, a FLOAT, a STRING or anything like it : all these simple types are encapsulated by what I called an Atom class. Basically, all the elements in the remaining file are atoms.

Here is the structure of an Atom :

At which point, I was really wondering if the guys at VC weren't a bit crazy in the coconut because, usually, when you create a binary file format and deliberately choose not to use XML, that means you're after size optimization. But here, you have to know that Atoms that host values have a minimum run-length of 32 bytes. Even a simple boolean ! That means that, in order to store a boolean, you must write 2 bytes (Atom Type) + 2 bytes (Run Length = 32) + 32 bytes (the actual boolean value) = 36 bytes total ! (but who am I to judge ? In order to be actually future-proof, we must not eliminate the hypothesis that tomorrow, perhaps, booleans will be stored on 256 bits) (you never really know, that's the beauty with the future)

I have isolated the following Atom types encountered throughout the file :

I created an Atom class that simply reads Atoms from a standard System.IO.BinaryReader. The run-length encoded Atom Value is stored as a variant type that can be one of the following recognized types : 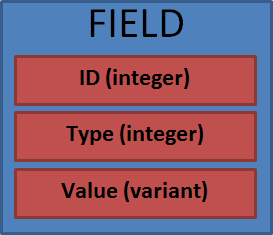 Fields are composed of 4 atoms (that I know of) and are like a super-atom of some sort.

A Field contains an actual parameter value, these are the parameters you can tweak in the Optical Flares plug-in and that describe the attributes of your lens flares.

There are fields in 2 types of objects :

Typically, an object (GeneralParameters or LensObject) starts with a header, a bunch of fields and a footer or end marker.

Here is the structure of a Field (remember we're now dealing with Atoms, not simple types like float or integer anymore) :

The Field ID is unique and corresponds to the ID of some actual field in your class.

For the purpose of automatically binding the fields from the file and the fields in a C# class, I created an "ID" attribute so when I create a field in my C# class, I also attach it its ID which corresponds to the ID that is read from disk.

With that system, binding fields is easy : simply read all the fields from the file and all the fields in your class (i.e. System.Reflection.FieldInfo) then build a map that links them together. Deserialize. Add salt. Serve cold.

The Field Type is an INT cast into a FIELD_TYPE enum that can take the following values :

Nothing to say here, this atom merely hosts the (variant) value of the field which we can retrieve and cast to the proper type according to the previously read Field Type described above.

A standard OFP file with only 1 Lens Object

So basically, instead of using a standard BinaryReader to read the file, you start by reading the header then all you're going to read are Atoms after that. It's a bit like if the BinaryReader transformed into an AtomReader instead.

Here is the general file structure :

And this is how you read the file :

The main loop of the file reader reads a single Atom that will either be :

We exit the loop when we reach the end of the binary reader (i.e. EOF).

Say we encountered an atom with ID=0xBB8, this marks the beginning of a General Parameters object block.

All we have to do is to create an instance of the General Parameters class, then de-serialize its fields.

The field groups are :

We stop reading the block when we encounter an atom whose ID=0xFA0 which is the end marker.

Say we encountered an atom with ID=0x01, this marks the beginning of a Lens Object block.

This Atom also gives us (via its INT value) the type of lens object that is described further. Here are the 12 supported types :

This atom is followed by :

All we have to do then is to create an instance of the appropriate LensObject object with its name and Hide/Solo flags, then de-serialize its fields.

We stop reading the block when we encounter an atom whose ID=0x3E8 which is the end marker.

As we have summarily described earlier, de-serialization of fields is made quite simple via the Field IDs and the IDAttribute attached to the physical class fields.

The de-serialization of fields exists as a single method that lies in the base class of all de-serializable objects (i.e. GeneralParameters and LensObjects alike).

This methods does the following :

Check the Lens Flare page to get my free LensFlare class in C# that is able to read OFP files.