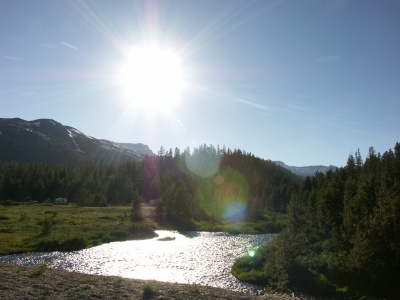 Lens flares are common post-processes that were rendered popular by the infamous "Lens Flare" filter in Photoshop which can be easily recognized in many synthetic images from the early 90s (and still today in images from suspicious websites as it's quite official that this plug-in, although serving its purpose in its time, is now a proof of arguable taste).

Lens flares are created by light entering through a camera objective and reflecting multiple times off the surface of the numerous lenses inside it, creating several recognizable artifacts.

I won't linger on the optical details of what creates which lens-flare artifact, I'm only concentrating on their visual aspect. For that purpose, I relied on a well known After Effects plug-in called "Optical Flares" by Video Copilot (http://www.videocopilot.net/products/opticalflares/).

Before reading any further, I advise you to watch the nice tutorial video of this plug-in so you get familiar with its capabilities and vocabulary.

I attached myself to the annoying task of reverse engineering the OFP / Optical Flares Preset file format.

The LensFlare class is written in C# and is available here : http://www.patapom.com/Temp/LensFlare.cs

It reflects all the informations contained in an OFP file and supports the 12 kinds of Lens Objects that exist in Optical Flares, shown in the image below. 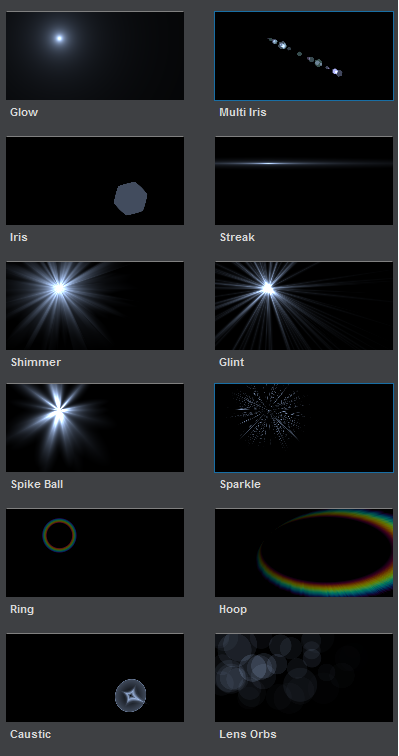 Of course, this class only describes a lens flare, it doesn't display a lens-flare. So that's what we're going to see later.

All lens objects have these parameters in common :

On top of these global parameters, each lens object has different local parameters like its complexity, its length, thickness, spacing and random variations on these parameters.

Some of the objects (the ones with random length/brightness/thickness) also have a simple animation of their brightness and length by specifying an animation amount and speed.

All objects in the Lens Flare render technique use a single empty point that is instanced as many times as there are entities in the object.

Some object are displayed using a single quad entity where the pixel shader does all the work of clipping and computing the correct color for each pixel. That is the case for :

All other objects instantiate their geometry via a geometry shader for each point instance. 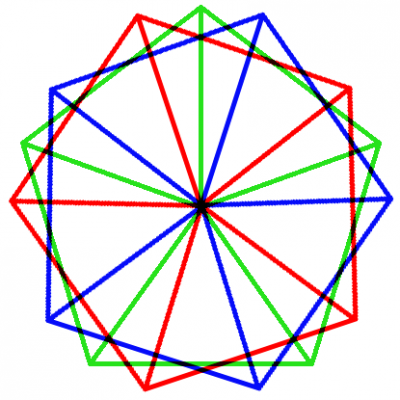 Geometry of the shimmer : 3 polygons on top of each other. Each branch of the polygons can undulate randomly, creating the shimmering effect. 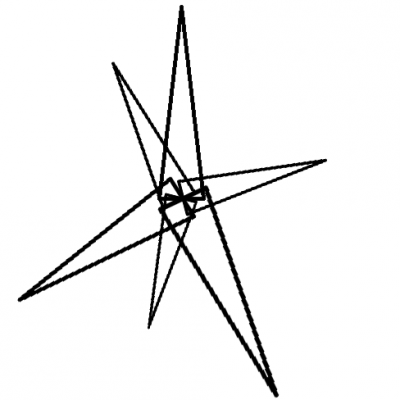 Geometry of the glint. Each spike can be animated in length and brightness. 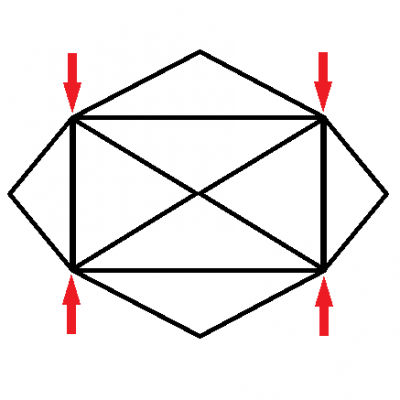 Geometry of the streak. The fan ends can be collapsed or expanded. 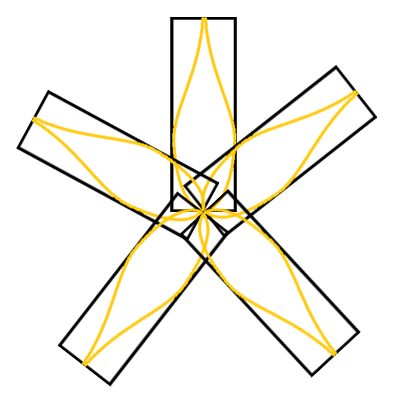 Geometry of the spike ball. Each "petal" can be animated in length and brightness.

There is also a final blending pass that blends the lens-flare to the screen, adding interesting features like : 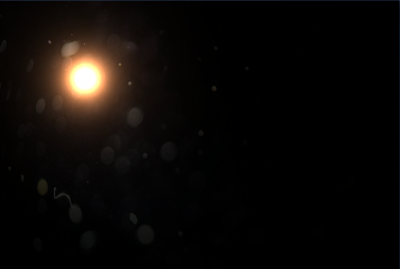 The lens texture lets appear dirt on the lens when the light moves. 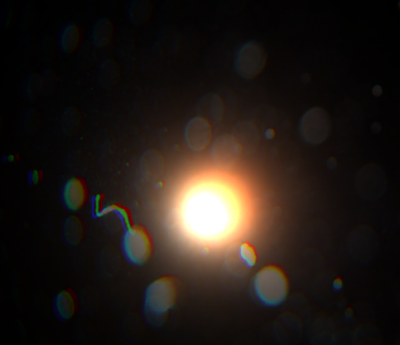 Red/Blue shift aberration where R, G and B components are dissociated.

On top of the default additive blend mode, the people at video copilot also used a mode quite familiar to Adobe products users (but not so much to realtime graphics programmers) called the screen mode. I'll talk a bit about how to achieve this mode using our standard blending pipeline in graphic APIs as it's not that easy !

The screen mode is considered to be the opposite of the multiply mode. The blending equation is like this :

For the sake of completeness, let's recall what our familiar blending pipeline is able to perform :

So, how can we achieve the correct function ?

Assuming you patch your shader to return 1-Src instead of Src, you can yet manage to do (1-Src)*(1-Dst) which is starting to get close enough.

So we see that using a wrong we make a right ! It means that using the (1-Src)*Dst blending operation is actually performing the right operation on the second step ! Recursively, Dst_2 is also wrong as Dst_1 before it because it's not complemented, but re-applying

will actually complement Dst_2 in that stage. So we can deduce that, except for the first stage and the last (that will need to be complemented manually), all intermediate stages will do alright if we use the (1-Src)*Dst blend operation !

To sum up, to obtain a correct screen mode, all we need to do is :

So here you go : screen blend mode for you

It may not look like much but the difference between screen and additive blend modes is actually quite important as shown in the examples below : 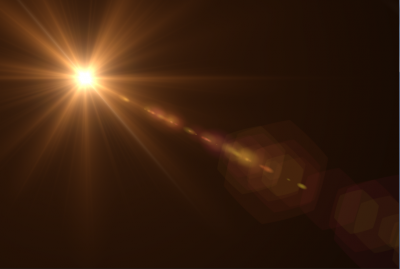 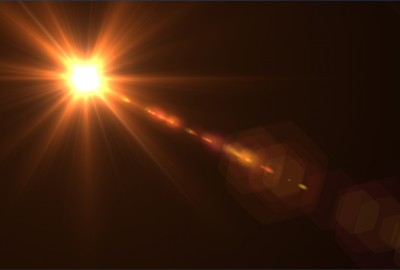 After spending almost a whole month replicating the Optical Flares technology, I have to admit these guys are quite clever ! They use some pretty cool combinations of additive geometries to achieve nice and unexpected results.

That was quite hard work but I'm pretty happy with the result, even though there are some configurations that are still quite wrong and although I couldn't achieve to replicate all their objects faithfully. That's also one of the reasons why I believe the guys at Video Copilot are clever (except on their file format), as they have used some pretty messed up functions that I couldn't exactly pinpoint !

Here is a comparison of the rendering done by Nuaj' and the one in After Effect : 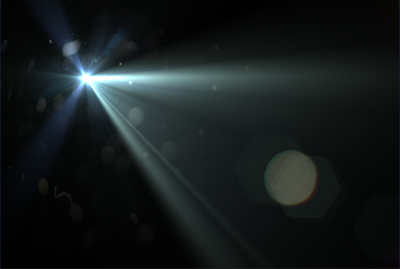 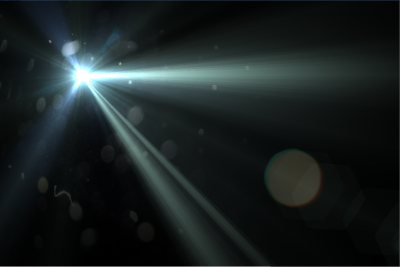 There are obvious discrepancies like luminosity levels, difference in sharpness of some elements and obviously the randomly placed elements not being at the exact same place in both renderings. Some of these are due to simplifications on my part, others to inaccurate formulas and as there can be up to 20 elements, each displaying maybe hundreds of additive primitives, the differences can show pretty rapidly but I believe the result is still quite acceptable for my purpose.

Check out the video for more lens flares and to see their realtime behaviour.