Nuaj' [nu-a-j'] is my little .Net renderer for DirectX 10. It's quite small and really easy to use. Source code is available as a GIT repository and it's free.

Make sure to also check Cirrus, the companion high-level module for Nuaj'.

It's now using SharpDX by Alexandre Mutel, a .Net wrapper that tightly wraps DirectX for use into .Net managed code (Nuaj' was previously using SlimDX, which was really great too but larger in size and more annoying for some matters).

Also, it was created with Visual Studio 2010 and .Net Framework 4.0 so make sure you have that !

Update: The example meshes and textures are now quite huge so make sure you have a lot of room on your hard drive (like 2Gb) and please be patient with the SVN checkout !

The main idea behind Nuaj is to "make my life easier", not to create the ultimate renderer that washes dishes and serves coffee. Those are never finished and you always come up with a bad surprise once it's time to use it (providing that you reach that point).

So I decided to create first a set of basic helpers to manage my stuff. Basically, all I need is to create geometry easily using vertices and/or indices, I need to create materials from shaders that compile either from memory or from file, I need to create textures and render targets to feed my shaders and rendering pipeline, tie all this together and roll the dice...

Just so you see how easy it is to write your own demo with Nuaj (and so you will want to read on to the end of that page), here is the basic code you'll have to write to render a textured cube (I skipped the shader code here) :

All helpers in Nuaj derive from a base Component class that takes a Device and a Name as basic parameters for construction.

Basically, nothing fancy here, you just create your Device with specific parameters and call "ClearRenderTarget()" and "Present()" to run the show. The Device is the first parameter needed for every other component type in Nuaj so make sure it's created first.

In the latter case, it automatically watches the file for changes so your shader is recompiled every times the file changes (ideal for debugging !). It also supports a default "Error Shader" when your shader fails to compile. The material also supports what I call "Shader Interfaces" (more on that here) which are reeeaaally useful !

It contains a "Draw()" method that will render a non-indexed primitive using the vertices stored by the VB.

It contains a "Draw()" method that will render an indexed primitive using the indices stored by the IB.

It contains a "Draw()" method that will render the primitive using the specified Material and that will draw either an indexed primitive if an IndexBuffer exists or a non-indexed primitive otherwise. Typically, scenes exported from a 3D package should create a bunch of Primitives for their objects, each should then render in turn. NOTE: Materials can be assigned to multiple primitives, there are no restrictions on that.

An Image is a template against Pixel Formats so that it can be created to match a specific DirectX pixel format.

These textures are readonly from the GPU and not accessible by the CPU at all. They are the most common texture types for rendering and must be provided with initial data (i.e. an Image or a CubeImage) at the time of creation, there is no delay-loading of these ones. A Texture2D is a template against Pixel Formats so that it can be created to match a specific DirectX pixel format. It must be built using images that have the same Pixel Format.

These textures are also fairly common to perform "render to texture" operations and can be bound either as input for the shader or as an output render target for the pipeline. They are not accessible by the CPU at all (in fact, they are but who cares ?). A RenderTarget is a template against Pixel Formats so that it can be created to match a specific DirectX pixel format. It must be built using images that have the same Pixel Format.

It also contains several helpful methods to drive the camera around and initialize it correctly, plus a Frustum geometric objet that is used for simple culling.

Vertex structures are types that need to be used as templates for Materials and VertexBuffers. They are directly mapped to vertex shader input layouts.

There are already a couple of them pre-defined in Nuaj so you don't really need to create new ones unless you need a very specific type of vertex declaration.

They must be built using the following pattern :

Notice the [Semantic()] attribute that must be associated to each field and must correspond exactly to the semantic you use in your vertex shader input declaration. Semantics are automatically resolved by the Material at shader compilation time.

Also, the supported types for the fields of Vertex Structures are :

There are already a couple of them pre-defined in Nuaj so you don't really need to create new ones unless you need a very specific type of pixel declaration.

Pixel formats structures all contain fields that must match an existing DirectX format. An example of such pixel format is the PF_RGBA8 :

Among the cool stuff Nuaj helps you do, there is a very helpful feature called the Shader Interfaces.

The basic idea is to associate a fixed set of shader semantics to an "interface". All shaders that have that set of semantics are said to implement the interface.

On the C# side, we declare the shader interfaces by telling which semantics it should look for and register such interfaces through the Device object. Materials (and their shaders) are then checked against all existing interfaces when they are created (or when the shader is recompiled) and expose a set of interfaces they support.

Then, you simply have to create some InterfaceProviders that support a given interface and that are able to provide data for it. These providers are then called for each material and assign their data to the material's shader at runtime.

Some providers are registered globally for the application, some others can be registered for a single rendering pass while others can register per-object. Registering a new provider for an interface overrides any existing one, thus more specific providers can take over more general ones.

This is a really powerful mechanism that helps a lot to automatically feed the shaders with the proper data.

Here is a really simple example :

Note : The Camera helper already implements such a provider.

Now, if you understood the principle but don't see the benefits, just imagine a shader code that includes a shader interface for shadow maps (this interface is complete with the WORLD => SHADOW matrix and the Shadow Map Texture2D as well as a function to compute shadowing of a given World position).

So basically you get that kind of shader code :

Then your shader will automatically be provided with the appropriate data for shadow mapping without you having anything to do on the C# side ! Isn't it cool ?

If you create a new application from scratch and wish to use SlimDX, make sure to edit you app.config file and change from these lines :

to these ones so you can use backward compatible assemblies :

Here are some basic examples to demonstrate the possibilities available through Nuaj : 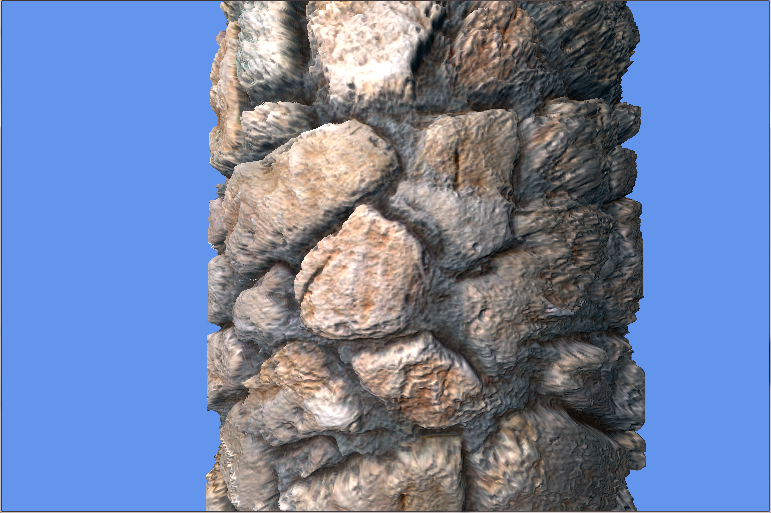 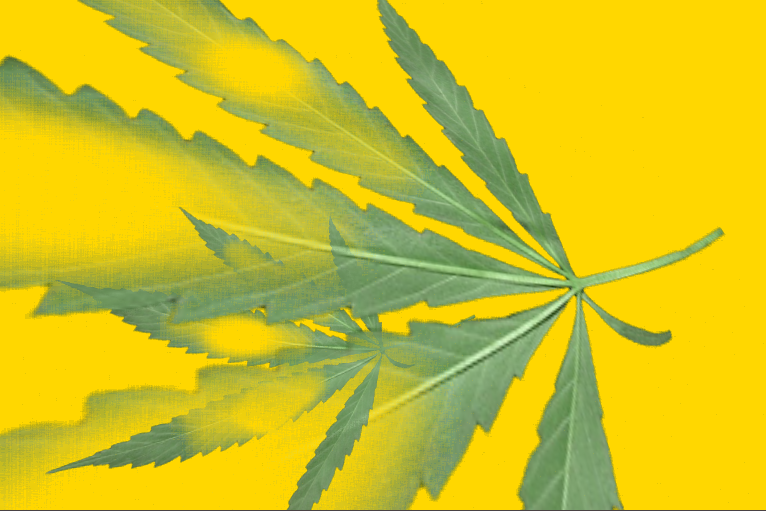 A 3D adaptation of the classical "water effect" by Iguana (Heartquake, 1994) using meta-balls and 3D textures : 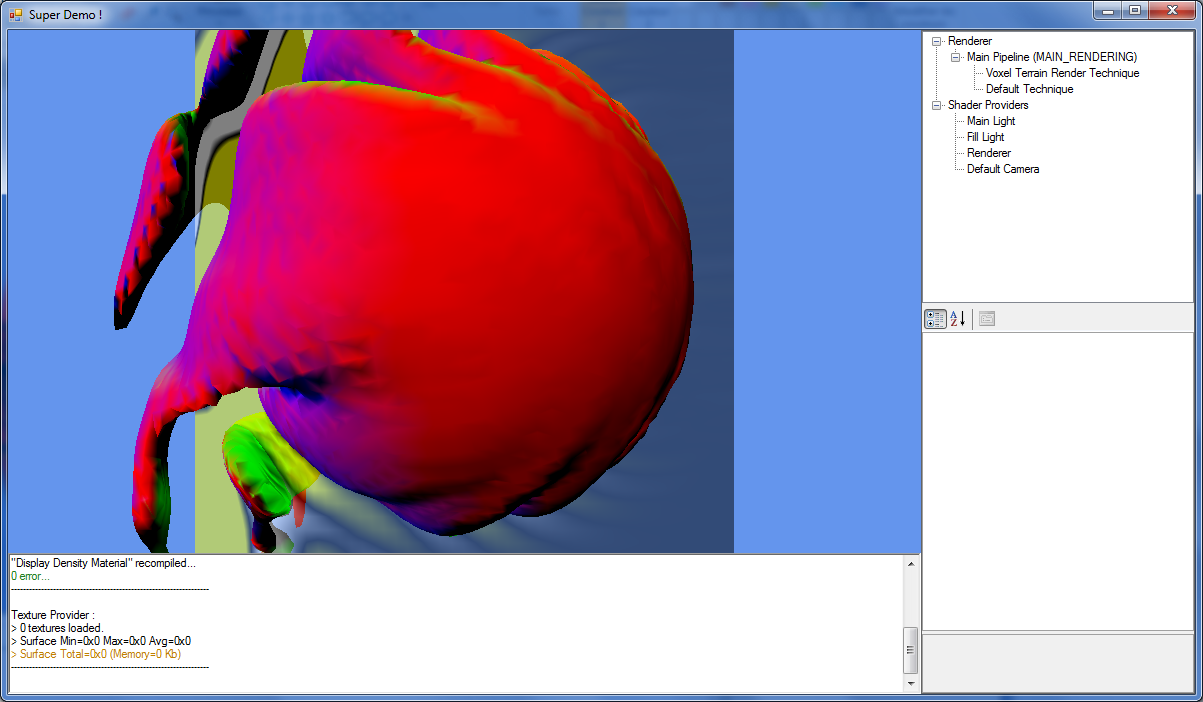 Nuaj' is really cool to prototype small rendering projects, several demo apps are provided with it so you can quickly setup basic projects.

If you wish to achieve better and more complex rendering though, you may check out the higher level Nuaj wrapper called Cirrus that helps you render complex scenes loaded from 3D packages like 3DS Max and Maya.

Nuaj' is now the proud owner of its very own sequencer ! 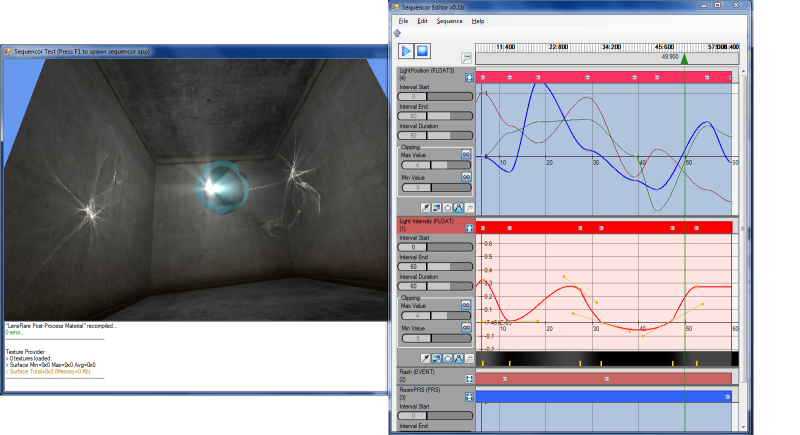 This sequencer allows you to animate and tweak various parameter types :

The frontend can be spawned in standalone or embedded into Nuaj' where it's then able to sample parameter values in real time (like, move the camera and sample its matrix for a PRS key).

It can either use its own internal timer or use an external time you will provide (e.g. the music's position) for sequencing.